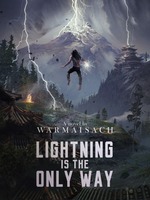 What is Lightning Is the Only Way

Lightning Is the Only Way is a popular web novel written by the author Warmaisach, covering WEAK TO STRONG, CULTIVATION, MONSTERS, ADVENTURE, GODS, MALE-PROTAGONIST, ACTION, MULTIPLE-REALMS, WORLDTRAVEL, BAD LUCK, Eastern Fantasy genres. It's viewed by 1.4M readers with an average rating of 4.7/5 and 42 reviews. The novel is being serialized to 286 chapters, new chapters will be published in Webnovel with all rights reserved.

With a father as strong as the highest heavens themselves, nothing hindered Gravis from having a comfortable life. But when Heaven used him in a scheme to get back at his father, Gravis realized that he needed strength to gain true freedom. As long as he remained his weak self, he would always remain beneath Heaven’s oppression. To gain strength, Gravis ventured into the lower worlds to start his cultivation under true life and death tempering. Only a strong will, which had been forged in striving for every resource available, would allow him to reach the peak. Heaven’s strongest weapon was Lightning of Divine Punishment, and only if he made this weapon his, would he have a chance. So, to overthrow Heaven, Lightning Is the Only Way Join him in his journey to reach the peak! -- There will be 2 chapters a day -- Thanks go to Noel and Chaotic_Luck for Proofreading! Cover by: digitalrowye

Reaper of the Martial World