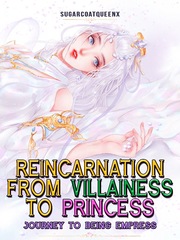 Reincarnation From Villainess to Princess: Journey to Being Empress

What is Reincarnation From Villainess to Princess: Journey to Being Empress

Reincarnation From Villainess to Princess: Journey to Being Empress is a popular web novel written by the author sugarcoatqueenx, covering REINCARNATION, VILLAINESS, ROMANCE, LOVE HATE, PRINCESS, ARRANGED MARRIAGE, EMPRESS, KINGDOM, PRINCE, MONARCHY, Contemporary Romance genres. It's viewed by 170.7K readers with an average rating of 4.81/5 and 17 reviews. The novel is being serialized to 77 chapters, new chapters will be published in Webnovel with all rights reserved.

Tianshi Xue was pretty sure she already died. After falling into the depths of the sea and feeling her last breath leave her body… she was sure she was going to the afterlife. But then she woke up. In another woman’s body. And that body belonged to a princess. — Tianshi Xue was a popular model turned actress. She was known for her striking looks and not-so-good ways in the business. A lot of people admired her for the lengths she was willing to go just to be successful. But a lot of people also hated her. She was not even surprised that someone killed her—or at least tried to. She woke up in the body of Princess Lin Yingyue, the daughter of the tyrant emperor from the Shānmài Empire, promised to marry the second prince of the Hépíng Empire. But because of a sudden invasion, Tianshi Xue—now Princess Yingyue was forced to marry the man she loathed from the moment she heard his name, the notorious young general, 3rd Prince Yang Qui. Tianshi Xue found herself living in the palace—a place that housed more drama than the TV. With her new body and title as a princess, Tianshi Xue was bent on trying to find the person who wanted her dead. But on the more important note: If death was necessary for souls to transfer to another body, does that mean that the princess died also? Or did someone tried to kill her too? — Photo on the cover is not mine. Credits to the owner of the beautiful work! REMINDERS: (You will be redirected here in case you seem to forget) 1. English is my second language. If you notice grammatical and spelling errors, please do leave a comment and I will fix it. 2. Please leave CONSTRUCTIVE criticisms about the plot and characters. Let me know what you like and what you don’t so we can improve more! 3. This book is slow-paced. Yes, if you’re ready to endure that please do continue. ROMANCE MIGHT BE A LITTLE LATE FOR THE LEADS. I am not a fan of instant romance. 4. Please DO NOT BE RUDE in the comments section, if you do not like the book please have the courtesy to just leave. Discord link: https://discord.gg/6nwayzs Not a historical drama/fiction. Modern monarchy. Romance. Mystery. Fantasy-ish. Dystopian-ish.

Re: The Villainess Does It With Class