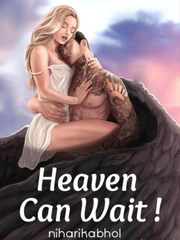 What is Heaven Can Wait!

Heaven Can Wait! is a popular web novel written by the author niharikabhol, covering ROMANCE, SYSTEM, MAGIC, ACTION, REINCARNATION, COMEDY, FANTASY ROMANCE, FACE-SLAPPING, ANGELS AND DEVILS, STRONG-MALE LEAD, Fantasy Romance genres. It's viewed by 318.5K readers with an average rating of 4.85/5 and 31 reviews. The novel is being serialized to 112 chapters, new chapters will be published in Webnovel with all rights reserved.

[Warning : MATURE CONTENT] "Don't look at me like that Morpheous! Please!" Her quivering lips begged, but her ignited breath flamed nothing but sinful desires in him. "Ask me anything tonight Caroline, but don't ask me to stay away from you." Echoed his raspy voice as he cupped her chin tenderly. His smoldering amber eyes were fixated on her lips, aching to touch her softness for just a fleeting second. But the moment he leaned closer, something got etched on the wall next to her in a hue of yellow and vermilion. His jaws clenched and taking a step back, he cursed. "You!" "You need to stay away from me!" And she saw his amber eyes burn with a flicker of blue! --------------------------------------------------------------- He was a ‘Healer’, unlike his brothers who possessed immense angelic powers and craved for more, and she was a ‘Mortal’, passionate about doing her best to save human lives. Banished from the land of God, when he was thrown to earth; his wings clipped, she entered his life. Pained by the treachery of his brothers and the distrust of his father, the fallen angel was left with no reason to exist, but she showed him that there was more to earth than he knew about. She intrigued him, annoyed him but at the same time made him feel alive again. But the problem was, the more he got to know her, the more he was smitten. And angels were not supposed to fall in love with earthly beings. He became her shadow, but for her, he was her lifeline. But she had no clue that he had a hidden plan all long. What will happen when she gets to know that the man that she was head over heels in love with, was someone who was not even a human, for he was an angel, who had been sired by the devil. What will happen when he has to choose between her and the path to redemption? Read more and get swayed in the intense love affair of Morpheous and Caroline. ------------------------------------ Cover - I do not own this cover. I have just edited it. If you have any issues then kindly let me know. I will take it down Instagram - niharikabhol Discord - https://discord.gg/cPVJ69e Mentor - Piokilek (My friend, philosopher and guide. Do read his books!)

My New Lover Is A President

Ettrama: The Secret In Love