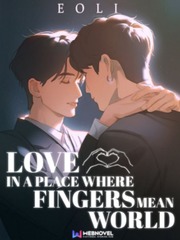 What is Love in a place where fingers mean world [BL]

Love in a place where fingers mean world [BL] is a popular web novel written by the author Eoli, covering BL, YAOI, ROMANCE, DRAMA, ACTION, COMEDY, MODERN, GAME, HANDSOME-MALE-LEAD, TRAGEDY, LGBT+ genres. It's viewed by 332.3K readers with an average rating of 4.65/5 and 19 reviews. The novel is being serialized to 125 chapters, new chapters will be published in Webnovel with all rights reserved.

“He was standing at the edge of the rooftop, looking down at the ground. It looked like paradise. Full of trees, lawns, kids playing happily outside. He looked at them with jealousy. Why can’t he be like them? Why did he have to suffer so much? ’I would jump somewhere else…’ A deep voice sounded behind him, changing everything.” Not everyone can live a happy life. The two of them shared this similar fate. They were exhausted from living in such a world that didn't favor their circumstances. One was abandoned, one was abused. One day, they had a sudden meeting at the school's rooftop. At that moment, fate interfered, tying the strings of their destinies. That very fate worked to make a journey that they could travel together. However, their meeting did start off on the wrong foot. They haven’t become friends. Would the plan that fate wove for them be fulfilled when they are destroying each other? Will their relationship overcome all the problems?

Playboy is my Date