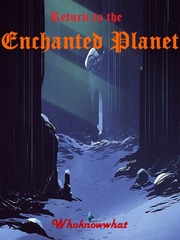 What happens when a six thousand years-worth technology-dependent civilization comes into contact with mana, or scientifically known as ‘TreDecon’? Yes, this is what happened to the Earth… Humans are dragged down from the top of the food chain to the bottom of hell. Afraid and devastated of the dangers, humanity decided to abandon their home planet, Earth, and flee... 20 years later, Aiden and seven other adolescents return to investigate and study their once used to be their home planet. However, the enchanted land was not what they expected. The mana is known as ‘TreDecon’ had enchanted the lands somehow… Amidst the group's investigation, Aiden and two others were knocked off the path due to the sudden appearance of a giant skeleton hand. Before he joined with the others, Aiden realised that this enchanted world was more dangerous than he thought. This place wasn’t their friend at all. Will Aiden survive the ordeal that had wiped out 90% of the human population from the face of the Earth? Will he find the true reason for this ‘Mana Apocalypse’? Was it really a scientific disaster, or… Discord: https://discord.gg/9aK4SP Updates: 7-9 chapters/ week New chapter upload time: 2:30-3 a.m. Beijing time.