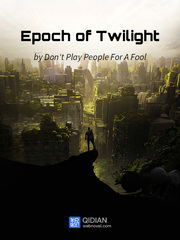 Don't Play People for A Fool

What is Epoch of Twilight

Have you ever thought that the state of the world as it presently is, could revert to the laws of the ancients? When a series of strange incidents beginning with the disappearance of his friend led Luo Yuan to question the possibility of an apocalypse, he becomes embroiled in the midst of a global-scale chaos. Evolution has turned the flora and fauna of the vast and bountiful Earth into something that had never been seen before. Coincidentally, the all-dominating Homo sapiens have ended up at the bottom of the food chain. From mystery to crisis, will Luo Yuan discover a means of saving humanity by racing to the top of the food chain? Or will he strive in accordance with the law of the jungle? It is the dawn of an age of the survival of the fittest.

Stronghold In The Apocalypse