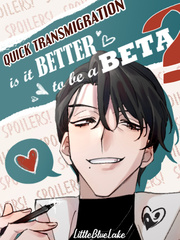 What is [BL] Quick Transmigration: Is it Better to be a Beta?

[BL] Quick Transmigration: Is it Better to be a Beta? is a popular web novel written by the author LittleBlueLake, covering BL, YAOI, R-18, SYSTEM, QUICK TRANSMIGRATION, BOYSLOVE, COMEDY, WORLDHOPPING, ORIGINAL, LGBT+ genres. It's viewed by 2M readers with an average rating of 4.86/5 and 410 reviews. The novel is being serialized to 111 chapters, new chapters will be published in Webnovel with all rights reserved.

Jia Hyson finds he has hit the jackpot after he dies. He's got a system! He's a transmigrator! So cool! System: "Please help us fix the plot." Jia Hyson: "Of course!" System: "Firstly there are too many love interests." Jia Hyson: "Okay." System: "The main character is too annoying." Jia Hyson: "Um." System: "Needs more world building." Jia Hyson: "..." Oi, is he fixing the plot or is he rewriting the whole damn thing?! (This is bl/yaoi/danmei btw. 1v1, 2v1, 3+v1)