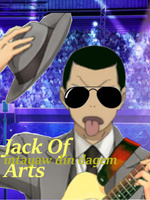 What is Jack of Arts

Jack of Arts is a popular web novel written by the author Intayaw_din_Dagem, covering SHOWBIZ, SECOND-CHANCE, SYSTEM, MODERN, SLOW-PACE, MUSIC, CELEBRITIES, HOLLYWOOD, UNDERESTIMATED MC, MOVIES AND DRAMA, Magical Realism genres. It's viewed by 70.2K readers with an average rating of 4.8/5 and 11 reviews. The novel is being serialized to 54 chapters, new chapters will be published in Webnovel with all rights reserved.

Tayaw is a talented musician who never got to fulfill his potential. After losing his purpose in an unfulfilled life full of regrets; he is given the chance to go back in time and do everything over again. Along with a mysterious gift and an unclear mission, Tayaw starts a new life, this time making his mark to the world. -------------- "Tayaw is a once in a hundred years musical artist! I just wish he was born in my generation" - Buddy Rich, two-time Gramophone Award winner "I admit he's a good musician, but he's an author first and foremost. He is changing the world of literature for the better." - Helena Paddington, Outcault Prize for Fiction winner, Sohlman Prize for Literature winner. "Despite being a musician and an author, he is to me, the greatest blessing to the film industry. This is his era." - Heo Dong-jun, two-time Academy Award winner for Best Director and three-time nominee. "I hated the kid at first. He practically made Theater Drama obsolete. But with his talent, he brought a new golden age to the world of Musical Theater." - Austin Washington Black, three-time Toby Award winner for Best Original Score and four-time nominee. "I don't like him. Why does he use actors who didn't train and grind on the stage? He says he doesn't like my acting? What the hell does the kid know about acting? I've won awards for f*cks sake!" - Merrell Street, five-time Academy Award winner for Best Actor, three-time Toby Award winner for Best Actor. --------------- A ground work for a novel idea in the future. --------------- English is not my first language so excuse my limited vocabulary and bad grammar. thanks

Let Me Make You a Star

The Rise Of Otaku

Story of a Big Player from Gangnam