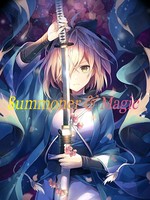 What is C: Summoner & Magic

C: Summoner & Magic is a popular web novel written by the author Irelia, covering MAGIC, FANTASY, MAGICAL REALISM, Fantasy genres. It's viewed by 280.7K readers with an average rating of 4.7/5 and 16 reviews. The novel is being serialized to 21 chapters, new chapters will be published in Webnovel with all rights reserved.

My Life in Blue Exorcist

The Prince of Magic