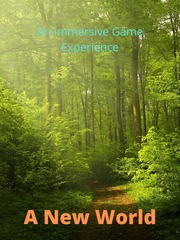 I am rewriting this, as well, the first synopsis only counted for like 50 chapters or so. (Which I am proud I managed to write.) Basically, an immersive VR game has been released called; A New World. The hook for the gaming company is that their headset can be used to game while sleeping, giving people back that time. Naturally many people jumped to claim this, including our protagonist: Eldrian. He wanted to explore the game and find a second life. Wanting to learn the lore, the magic and how to craft. Yet quickly his plan's were changed. Finding the game's realism and immersing himself in it, he quickly found the emotional toll the game could have on players. He quickly learned that this world's people were in danger. Leading him to taking it far more serious than he ever thought he would. Doing things he never imagined he would need to, enduring what he never expected to. Arthur note: I am new writer trying for the first time. I have this grand idea of creating the game I always dreamed would become available. A true new world, but with the benefits of being a game. - This quickly changed into more a fantasy world than just a game. This is due to the realism I want to be present, certainly will give myself more leeway next time. In any case this is my attempt, to make a game, where the world truly lives. A world where the world is there for the fun, and not just the setting. Something quickly lost to the players when they find themselves in the peril the world is in. Unfortunately, my writing level isn’t at what I wish it was. But everyone starts somewhere, and this is my somewhere. -------------- I will try to upload daily. Chapter length of more than 1500 words Discord server: https://discord.gg/DAM4jsa Cover made via Conva free