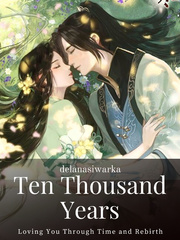 What is Ten Thousand Years: Loving You Through Time and Rebirth

Ten Thousand Years: Loving You Through Time and Rebirth is a popular web novel written by the author delanasiwarka, covering REINCARNATION, ROMANCE, ACTION, FANTASY, REBIRTH, ADVENTURE, BEAST, SLOWBURN, COMEDY, WUXIA, Fantasy Romance genres. It's viewed by 204.2K readers with an average rating of 4.71/5 and 20 reviews. The novel is being serialized to 153 chapters, new chapters will be published in Webnovel with all rights reserved.

"I would crawl through Hell to find my way back to you. My beloved, that was my promise to you, And I would not give up no matter how long it takes." *** Ouyang Xueqing thought that she would spend her whole life leisurely as the Princess of Beast Mainland. But when she met a human male named Mo Yujian, she somehow felt some kind of indescribable attraction that pulled her toward him.  Because of that, she would do anything, even sneaking out from Beast Mainland to go to where he was, disguised as an ordinary male, just for the reason of being by his side. But when the secret of her being a demonic beast was found out, what would Mo Yujian do? Would he hunt her, just like all the humans did? Why did she long for him so much to the point where she was willing to sacrifice anything? A big, dark secret was waiting for her as she went on a journey and discovered who she actually was. [THIS IS A SLOW BURN BOOK] Volume 1 - The Beginning Volume 2 - Blossoming Love Volume 3 - The Awakening Volume 4 - War, Blood and Love Volume 5 - To be continued >

On My Way: The Demon King Made Me His