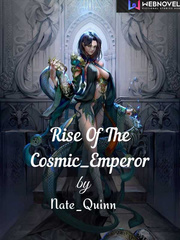 What is Rise of the Cosmic_Emperor

Rise of the Cosmic_Emperor is a popular web novel written by the author Nate_Quinn, covering R-18, HARÉM, ROMANCE, ACTION, REINCARNATION, COMEDY, CULTIVATION, Eastern Fantasy genres. It's viewed by 995.8K readers with an average rating of 4.75/5 and 32 reviews. The novel is being serialized to 106 chapters, new chapters will be published in Webnovel with all rights reserved.

There are three realms in the multi verse; The cosmic, the mortal and the nether realm. Hal grew up in the mortal realm with no idea whatsoever of who his parents were. His love for relics, adventure and the occasional danger would aid him in finding a genie's lamp. Rubbing a genie's lamp should grant three wishes, but Hal is struck by lightening instead and eventually arrives in the Cosmic realm with a large book in his mind space titled; The Primordial Cosmic Grimiore, that apparently holds all knowledge for a perpetual reign. And so Hal's journey begins in a little city called Salmon city, in the body of a 17 year old boy also named Hal but was sold into slavery by his own father. Hal finds out who his mother (prior to reincarnation) whose bloodline now flows unmixed in his new body is.... Join Hal as he battles mortals, Dragons, phoenixes, Gods and many more together with his harem of Beauties for the complete subjugation of the three realms. --------------------------------- So this is an original novel and I am giving it my all and I hope you give it a chance. P.s The cover Is not mine

Rise of The Anti God