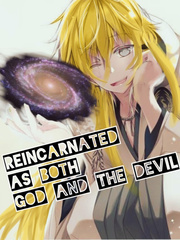 Reincarnated as both God and The Devil

What is Reincarnated as both God and The Devil

Reincarnated as both God and The Devil is a popular web novel written by the author Romeru, covering REINCARNATION, SYSTEM, OVERPOWERED, CULTIVATION, ADVENTURE, COMEDY, PSYCHOLOGICAL, TRAGEDY, FACESLAPPING, DUNGEON, Fantasy genres. It's viewed by 2M readers with an average rating of 4.74/5 and 108 reviews. The novel is being serialized to 228 chapters, new chapters will be published in Webnovel with all rights reserved.

A God and A Devil were about to die, both the strongest beings in their world. And, in a string of fate or perhaps being played by destiny, they reincarnated into the same person- but this time, they are not in control. This is a story about a man chosen to be both God and The Devil, Viel. Please be advised: Tackles about racism, sociopathy, pseudo-religions, and some other mature factors in our society. Please do know that this is a work of fiction, any similarities, if any, is purely coincidental. I have made a patreon page with illustrations on them, please do follow if you want to- patreon.com/Romeru