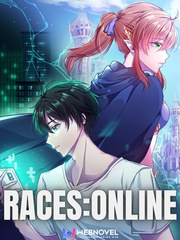 Races: Online ( VR Smartphone App ) is a popular web novel written by the author RachelRuth, covering SYSTEM, FANTASY, ROMANCE, COMEDY, MODERN, VIRTUAL REALITY, SCI-FI, SLICE-OF-LIFE, WEAK-STRONG, GAME-ELEMENT, Video Games genres. It's viewed by 1.6M readers with an average rating of 4.7/5 and 50 reviews. The novel is being serialized to 218 chapters, new chapters will be published in Webnovel with all rights reserved.

- What happens when a young man with bad luck receives the opportunity of a lifetime? After receiving a strange email to beta-test a game for $1000, will you venture into the world of Races: Online and meet multiple Fantasy Races? Will you embark onto the path of becoming one of the future Heroes and Adventurers by enrolling in the Kraelonia Academy? Will you seek to build your village or perhaps aim for the crown instead? See the world through the lenses of the main protagonist and other characters: Han Jing - a twenty-something young man who receives the email and becomes a Player. Live as a Student at Kraelonia Academy by night, but return to the real world by day and discover the world one lives in has its own secrets lingering beneath its surface. Timothy Cook - an NPC (?) from Rockfall Village who also travels with 'Han' to Kraelonia Academy. A young man with a fiery personality and the [ Firestarter ] Skill to match, after losing his mother during the Demon Lord's attack, does he have anything left to do? The allure of magic calls to him, but what if he sinks deeper than he could possibly go? A world of Classes, Levels, Swords and Sorcery... hop into the Races: Online server and start your quest today! Or maybe meet up with the other Players offline? "This Demon Lord would really like to have a word with you without the safety net of the game rules." --- WARNING: SLOW-PACED, MULTI-PERSPECTIVE SERIES. --- Support the Author: Discord: https://discord.gg/NNU4emZ Ko-Fi: https://ko-fi.com/cheldv Patreon: https://patreon.com/rachel_ruth Image not mine. Thank you Author of Searching For Andromeda for making the cover!