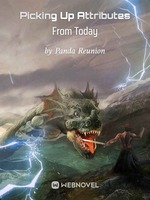 What is Picking Up Attributes From Today

Picking Up Attributes From Today is a popular web novel written by the author Panda Reunion, covering Eastern Fantasy genres. It's viewed by 1.4M readers with an average rating of 4.24/5 and 235 reviews. The novel is being serialized to 83 chapters, new chapters will be published in Webnovel with all rights reserved.

In Heaven's Vault Continent, Colossal Dragons, Titans, Beast People, Fairies, Magical Beasts, and other races reign supreme! Humans are treated like slaves and lowlifes, while Dragon People act all high and mighty and consider themselves nobility! However, a new addition will rock the boat and overturn the status quo! His name is Meng Lei, and he is a human from Earth that transmigrated to become a... villager! Or so he thought, as he had yet to unlock The Most Powerful Pickup System! "Ding! Dropped item discovered. Will you pick it up?" Be it money, items, spells, vitality, spiritual power... The Most Powerful Pickup System will pick them all! ... "Should I train to become a Magician or a Warrior? Why not try both!? ... Follow Meng Lei's epic as he turns from a regular villager to a formidable and respectable existence!