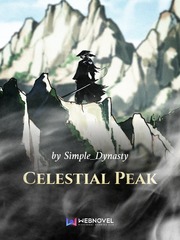 What is Celestial Peak

Celestial Peak is a popular web novel written by the author Simple_Dynasty, covering REINCARNATION, UNIQUECULTIVATIONTECHNIQUE, CULTIVATION, RUTHLESS MC, EASTERN FANTASY, CALM MC, ACTION, Eastern Fantasy genres. It's viewed by 2.8M readers with an average rating of 4.51/5 and 245 reviews. The novel is being serialized to 367 chapters, new chapters will be published in Webnovel with all rights reserved.

Wang Ling was the strongest and that’s irrefutable! He was the strongest of all the being in the world but was never satisfied with anything he accomplished. He slew a Celestial Emperor with one hit, annihilated the Yellow Dragon Monastery, eradicated the Vile Devil Dragons and many more of his feats had been recorded in the annals of history. He was revered as the strongest and as the insurmountable mountain of the realm. Yet, he gave up all of these when he lost his life after choosing to open the scriptures that killed every Celestial in the world and broke the chains of the realm. With his life essence depleted and cultivation broken, he turned into dust and was sucked into the scriptures he used to destroy the chains. The next thing he knew, when he opened his eyes again, the era was already different and the world was not the same, the rules and the laws of the world were changed and the spirit qi were altered. ……. I destroyed my era and I awakened in the next. The realm had changed but its ruler will never change. I have given them enough time to enjoy the seat of the strongest, but now that I am awake I am ready to reclaim what is mine and finally witness what is beyond the clouds. This time, I will reach the peak and destruction shall follow upon my wake. ~~~ Check out my other stories: 1.Monstrous Path 2. Empress' Evolution 3. Regal Ascension: God's Epoch This story will not revolve in romance where the MC will hunt for a woman he can fuck! (thank you for understanding.) Also, please support this novel by voting and writing a review... Enjoy the read! Oh, the second cover came from Silentscarlet graphics. If you can, check out his works in the forums, it's amazing as hell. discord channel where I will be pitching new stories: https://discord.gg/8EbkWhF