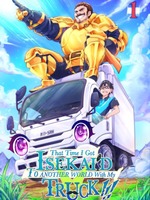 That Time I Got Isekai’d To Another World With My Truck!!

What is That Time I Got Isekai’d To Another World With My Truck!!

That Time I Got Isekai’d To Another World With My Truck!! is a popular web novel written by the author RantCafe, covering ISEKAI, COMEDY, REINCARNATION, ADVENTURE, ACTION, Fantasy genres. It's viewed by 1.2M readers with an average rating of 4.89/5 and 555 reviews. The novel is being serialized to 19 chapters, new chapters will be published in Webnovel with all rights reserved.

Birito Hondakawasuzuyota was just an ordinary Japanese delivery truck driver, until one day his truck was hit by an even bigger truck. In that moment, Birito was transported to another world with his truck, and he now finds himself hopelessly stuck inside a strange medieval fantasy. Worse yet, his small delivery truck has gained sentience. It speaks, it moves on its own, and it seems to think that it’s not a truck at all. The truck is convinced that she’s actually a girl, and worst of all, she seems to think that she and Birito are in a relationship. An intimate relationship. She says he's been “inside her” many times.