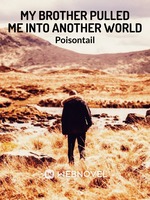 My Brother Pulled Me Into Another World

What is My Brother Pulled Me Into Another World

My Brother Pulled Me Into Another World is a popular web novel written by the author Poisontail, covering REBIRTH, REINCANATION, FANTASY, WORLD BUILDING, ISEKAI, Fantasy genres. It's viewed by 99.5K readers with an average rating of 0/5 and 5 reviews. The novel is being serialized to 35 chapters, new chapters will be published in Webnovel with all rights reserved.

Takeda Ryuji is a single 35-year-old workaholic manager of a Japanese conglomerate. Both brothers were otakus, Takehiko loved magic and elven stuff while Ryuji loved transmigration, rebirth and Isekai type of stories. Sadly, his brother passed away due to liver cancer which left Ryuji devastated. He cherished the hobby that he and his brother loved, to honor his brother's memory. On the sixth anniversary of his brother’s death, he was called by his boss to cover for another manager to finish an important project for the companyof their office even though it was his day off. He finished his work not until late at night. Ryuji finished his day by drinking beer to drown in sorrow and grief as he remembered the day his brother died like it happened barely hours ago. However, next thing he knew waking up was finding himself in a white room with two cosplayers. “A scholar and a warrior out of nowhere? Am I really dead?” Ryuji knew that his world view will be shattered forever. “Your heart went into an overdrive.” The warrior spoke in a straight face. That was the day that Takeda Ryuji died of heart attack and woke up in the Divine Realm’s reception area. ****************************** After his rebirth as the black-haired elf of prophecy, the elf child named Takeda Takehiko was praying in front of a pair of statues. “Mama Sefie-sama, can you bring my brother here when he dies?” The black-haired elven child looked at the Goddess of forest with twinkling eyes. “Hubby, do what our adopted child says!!!” The woman watching from their TV, turned to his husband wearing a dashing black suit with floral necktie. “I am on it.” Hades subtly smiled. He immediately called using his smartphone. “Yubis, send over Takeda Ryuji here.” “What?” The jackal god asked. “My adopted son wants to.” Hades replied “You know we can’t do that!” The jackal god retorted “Would you like your sis-in-law do it instead?” Hades countered “Oh! I am on it! In fact, Bishamonten said he will arrive in five minutes! I will be busy in accepting him, tell that to sis-in-law! Bye!!” The jackal god Yubis replied with delay. He was scared witless by the angry Goddess of Harvest. “Wifey!!! He will be over within five minutes!” Hades smiled “Hubby you are the best!” Sefie hugged his overbearing CEO god. ****************************** Brotherly reunion in another world, god migration, scandalous heavens, world building and a multitude of migrant souls. This is my first novel as an amateur writer. Suggestions are accepted. This was meant to be a light fantasy novel for a regular corporate worker like me. *edited the synopsis of MC's death.