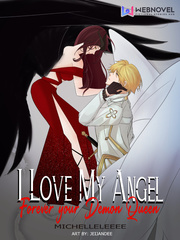 I Love My Angel, Forever Your Demon Queen

Many months, years, centuries she had watched Adam die. Eve would not wait any longer to spend all of her life with him. Little did she know that God would have plans for him and Satan would have plans for her! Now she's the Demon Queen but her love is an Angel. Would they still be together now that they are on different sides? Would the threat of war and betrayal defeat their will? What would they give up for one another? -- A shot, a zipping aimed at her and she lifted her injured arm to block it. Another and she was forced to let go of the killer as she winced from another arrow pierced into her arm. Dropping her arm, she looked at the shooter and her heart dropped. Mouth opened slightly, as if to say something, she could not find any words. Crossbow held facing her, the angel holding it did not waver from the person he was aiming at. Blue eyes were sharp as his blonde curly hair moved with the breeze. “Adam…” == Commissioned art from: @keiii.en [follow and like on Instagram]