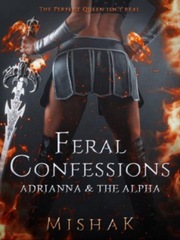 Feral Confessions - Adrianna And The Alpha

What is Feral Confessions - Adrianna And The Alpha

Feral Confessions - Adrianna And The Alpha is a popular web novel written by the author MishaK, covering MAGIC, ACTION, ACADEMY, FANTASYROMANCE, WOLFFICTION, FEMALE-PROTAGONIST, BEAUTIFULFEMALELEAD, SHAPESHIFTER, WEREWOLF ALPHA, HIDDEN-GEM, Fantasy Romance genres. It's viewed by 7.4M readers with an average rating of 4.73/5 and 757 reviews. The novel is completed and can be read all 544 chapters in Webnovel with all rights reserved.

(Warning: Mature Content After Chapter 70) Is this one of your typical teen fantasy romance novels? Well if you think that then you better read further! Her family disliked her. Her tendency to turn feral scared her grandfather. But that was exactly what Dmitri was looking for! Her tendency to turn feral, could it be any good? Entering into a forced union with him was something she would never do. She had built a castle around her heart, not letting anyone approach it. Witty, sharp, intelligent and fun-loving, Adrianna did not trust anyone. What happens in werewolf romance books, when an alpha who is calm, in control, merciless, extremely handsome and someone all werewolves feared, comes into the picture? Unfortunately, Dmitri doesn’t have many options open. The fights, the secret glances from across the room and the heated blushes. It is difficult to accept him. --- She was conflicted between herself and her wolf. Her wolf dragged her to him while she thought that Dmitri was wrong. If he was so wrong, why was she attracted to him? As she was struggling with her emotions, she heard a menacing growl and a threat. "Back off," he warned Pryce.  Adrianna looked at his face. He looked so dangerous , but she found it natural when her hand went up to his face to cup his cheek. She brushed her fingers across his cheek as though to calm him. Dmitri leaned his face onto her hand and closed his eyes. The two of them looked like two perfectly fitted puzzle pieces.  What was she doing, comforting the man who wanted to snatch away her freedom for a lifetime? Her thoughts stopped as her heart took over when she saw him leaning his face ontoin her hands. For Dmitri, this was the first time she had shown her affection for him and he was savoring every second. He squeezed her tighter just to check that she was really there, body and soul. She felt right in his arms and he wanted the world around them to melt forever.  Shifter romance books Discord - https://discord.gg/n9fN6rH https://www.instagram.com/mishakr12/ https://www.facebook.com/MishakWrites-111759630206886/ THIS IS A SERIES: Feral Confessions Feral Confessions: Adrianna and the Alpha (Completed) The Silver Crescent Prince (Ongoing) Ileus (Upcoming) Other novels by me: Two Contracts - My Lover is a CEO Sugar and Spice: The CEO's Feisty Wife

He is a Nymphomaniac.

Convincing her (Jen and Lucas)

Empress of Another World