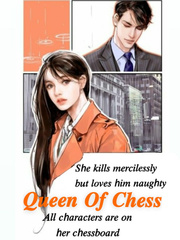 A woman gave a lopsided grin while swirling the wine glass, reading the headlines on the TV. "Checkmate! Ronan Ross is dead." ••• She was assigned to shot her doting ex-husband dead, while he struggled to win his 'dead wife' back. It's just a pity that she wanted his head, after falling into his hands intentionally. As she proceeded with her strategies, the underworld Lord grew suspicious. Finally acknowledging that it was a wrong move and that she had already triggered a war within three mafia rulers! (Volume 2) Renna Amaryllis escaped with Ronan's six years old daughter to Hawaii, but it seemed that the mafia king chased to hunt her down. When three men appeared claiming to be the child's father and the dirty circus began, exposing the dramatic ending to the show. TAGS: #mafiaKing #CEO #StrongLeads #technology #actionscenes #cleverFemale #gunsAndbullets #killing #deadWifecomesBack ._._._._. • Check out the introductory auxiliary chapter first. • Cover is not mine.