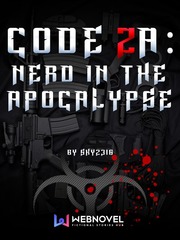 What is Code Zulu Alpha: Nerd in the Apocalypse!

Code Zulu Alpha: Nerd in the Apocalypse! is a popular web novel written by the author Sky2316, covering ZOMBIE APOCALYPSE, MARTIAL-ARTS, ROMANCE, ACTION, COMEDY, SWORD, GUNS, DOOMSDAY PREPPER, REALISM, CALCULATING MC, Horror&Thriller genres. It's viewed by 2.4M readers with an average rating of 4.79/5 and 143 reviews. The novel is being serialized to 496 chapters, new chapters will be published in Webnovel with all rights reserved.

"Better to have and not need than to need and not have." Sky Ishiyama is a nerd with Photographic Memory who after the bumps and turns in his life, turned to be a Doomsday Prepper. The story takes place in our world where our MC was diving through the Dark Web just for fun and discovered something that can only be found in books, movies, or games. Zombies, walkers, freaks, infected, biters, or whatever you may call them. They're fucking real. Ever wondered what you could do in a zombie apocalypse where you actually know what you're doing? Actually surviving properly while preventing stupid deaths? Doing what is right and necessary? Or better yet, actually doing what you shout in the monitor when you're watching a film? Our MC is coupled with the knowledge of not just fighting z's but actually surviving by securing his home, finding allies, scavenging for supplies, building a community and so much more. Disclaimer: All of the names and places mentioned in this novel are fictional and any relation to people IRL is purely coincidental. Discord Server Link: https://discord.gg/3JstDAV (It's just something I created for fun and random chatting with people that want to discuss more about zombie things and other random stuff. It's created on 16/07/20 so it's fairly new and nothing much is in there lol Anyway, everyone is free to drop by and spend a few minutes to pass the time.) My Discord: Sky2316#9623