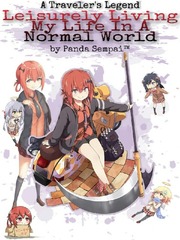 A Traveler's Legend: Leisurely Living My Life In A Normal World

What is A Traveler's Legend: Leisurely Living My Life In A Normal World

A Traveler's Legend: Leisurely Living My Life In A Normal World is a popular fanfic written by the author PandaSempai, covering HAREM, CHEATS, CALM PROTAGONIST, EVOLUTION, GAME ELEMENTS, SYSTEM, CARING PROTAGONIST, DXD, FANTASY CREATURES, BEAUTIFUL FEMALE LEADS, Anime & Comics genres. It's viewed by 1.2M readers with an average rating of 4.7/5 and 29 reviews. The novel is being serialized to 46 chapters, new chapters will be published in Webnovel with all rights reserved.

Born as an orphan, Shin Flammia grew up in the orphanage until he reached the legal age to find work. Due to this decision of his that led him to venture to the outside world, Shin was able to get to know something that turned into his hobby eventually. And that something is Anime. Day and night, he would work his ass off everyday just to buy a limited edition game or manga that he wanted. He continued to immerse himself in this newfound hobby of his that eventually, he couldn't take care of himself anymore. Because of his lack of sleep for the past few days and his body being as pale and sickly as it is, his body gave up. Slowly, he felt his body becoming heavy and his head is spinning. That was the end of his first life. But, whether it was because of a fluke, a beautiful, divinely ordained fluke, but a fluke nonetheless, he was granted a new shot at life. He died, yes, but a being that is so powerful that it could live inside the endless void offered him a new life. Why did this powerful being gave him this chance? Well, that was because the powerful being wanted him to, basically, 'beat up someone'. Why? Well, it's because its friends didn't let this powerful being join in in its friend's 'fun time'. A being this powerful can be this petty? Well, duh, try staying inside the endless void for millions and millions of years. Let's see how you will deal with the boredom! "Angels! Angels are so cute!" "I need to first get stronger so I can live my life in leisure later!" "Hey! Isn't that person supposed to be the antagonist of this whole thing? Should I take him down now to avoid future troubles?" "Whaa... everything is going so smoothly. Everything's always in my favor that it's scary!" Follow Shin in his attempt to enjoy life at his own leisure. Playing sports, battling, mofumofu times, and even forming his own crystal palace. This, is where a new legend, starts. ◇◆◇◆◇◆◇◆ The characters that will be introduced from other works are not owned by me. All of them belong to their rightful owners. I am not claiming ownership to any of the characters that belong to any series. This is just a fan fiction and is created because of my love for the animes that may be portrayed in this work. ◇◆◇◆◇◆◇◆ ◇◆◇◆◇◆◇◆ //WARNING!// I am completely new to writing and so, errors can be seen here and there. But, before I publish chapters, I made sure to proofread it for about 5 times. So, if errors can still be seen, please leave a paragraph comment so that I can fix it. If genres such as; Adventure, Fantasy, Harem, and Slice of Life are not to your liking, this fanfiction is not for you. If you are still curious enough to still try reading this and found it 'unpleasant' and 'not fit to your taste', then you are the one at fault for I already gave you my warning. ◇◆◇◆◇◆◇◆ Anime(s)/Novel(s)/Manga(s) that has been included in this novel are; • Gabriel DropOut! • Highschool DxD • Masamune-kun no Revenge • (will be updated as the story progress) I will be posting this story on ScribbleHub!