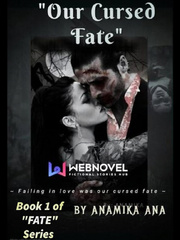 What is " Our Cursed Fate"

" Our Cursed Fate" is a popular web novel written by the author Anamika_Ana, covering ROMANCE, R-18, ACTION, ADVENTURE, COMEDY, MODERN, VAMPIRE, REINCARNATION, WEREWOLF, Fantasy Romance genres. It's viewed by 234.7K readers with an average rating of 4.84/5 and 30 reviews. The novel is being serialized to 84 chapters, new chapters will be published in Webnovel with all rights reserved.

{ SLOW BURN BOOK} * No Rape * WARNING : MATURE CONTENTS !!!! UPDATE: 1 chapter per day currently.Mass releases will start from February, 2021. * 300 votes in a week = 2 chapters * NOTE : This is the first addition of "FATE" Series. There will be other books adapting the characters from here in the near future. ~~~~ Our Cursed Fate ~~~~~ ( Falling in love was our cursed fate) [NOVEL FEATURES MATURE CONTENTS] Let's roam around into the parallel world of modern vampires and werewolves where they were living peacefully maintaining their own rules and regulations decided by the both mighty kings from two clans. But the cold war between werewolves and vampires still existed silently. What if a forbidden desire arouses from two different creatures? But their reunion will only shatter the peace between two clans.. Lilianah Winston, the most beautiful, childish, reckless, precious princess of the werewolf's clan who had always a crush on the dashing, cold blooded, handsome hunk Vampire Crown Prince Eric Salazar since her childhood!! Growing up into an young beautiful lady, she couldn't control herself from falling for this vampire prince more and more. Even getting all the harsh warnings from her sorrounding people, she couldn't stop herself to chase the man she desires, treasures always.. Indeed Love is too blind to follow any damn logic. But how is it possible?? Being born as each others sworn enemy, will it be possible ever to love each others wholeheartedly? Once someone said that "Beauty is poison" even this goes same to Lilianah.Being an undeniable beauty she is still unknown about the mysteries,dark sides of her own life. What will happen when their dark secrets will come out in front of each others leading to a disaster? Can love overcome the hate & revenge? Will Lilianah and Eric ever be together or the blame on their cursed fate for being born in enemies clan will remain forever?? Was it really their cursed fate to fall in love?? Find out the forbidden love story... {Note: Book isn't entirely edited. Only few chapters have been edited and will upload the edited version soon. Current editor and proofreader @Aurora Hiya} * * * Cover image credit goes to the original artist or owner.It was taken from Google. Cover is edited by @Ghayyoor Ahmad. * * * ********** Instagram : anamika_author Discord : Anamika_ana #5922 mail : suhanikaanamika@gmail.com Join Our Discord Server https://discord.gg/Av8ccCQ

The Crown Flower: My First Love

The Tale of Three Sisters