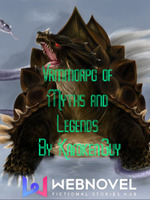 Vrmmorpg of Myths and Legends

What is Vrmmorpg of Myths and Legends

Vrmmorpg of Myths and Legends is a popular web novel written by the author KaiokenGuy, covering NONHUMAN-PROTAGONIST, GAME-ELEMENTS, ACTION, SYSTEM, CULTIVATION, ADVENTURE, MODERN, LITRPG, SWORDS-AND-MAGIC, MAGICALBEASTS, Video Games genres. It's viewed by 95.1K readers with an average rating of 0/5 and 4 reviews. The novel is over and can be read all 36 chapters in Webnovel with all rights reserved.

The life of an average Joe consists of the basic things of survival, get a job, a wife and to continue your bloodline, day in and day out all you do is continue the cycle that will never be broken, however, it isn't a bad thing, Richard Anton embraced his boring daily life. Anton became especially happy when his wife gave birth to his daughter, however, due to unfortunate events his daughter died thus breaking his psyche down transforming him into a shell of his fellow self, falling into a coma his wife left him as the child was the only thing keeping the two together. After he woke up and realized nothing else was left for him in this life he took his trusty gun and put it near his temple, as he was seconds away to shoot himself, the tv which was forgotten open started to play an AD that would change his life for the better. Enter the new virtual reality MMORPG of Myths and Legends that was basically a second life, for those that have no more will to live in this life they just can buy the VR Capsule and go to the next one! Want to roleplay as Jesus? You can! Want to become a giant phoenix who burns down villages and kills whoever it wants? You can! Do you want to learn the ultimate assassination techniques left behind by the hidden order of shadows? You can! Live out your fantasy in your second life! Forget your current one and venture into the next one! Want to support me and get yourself some cash in paypal so you can buy coins on webnovel? use this link to do surveys that pay you instantly in paypal, every survey you do net you 1$ and the most it can take you is 20 minutes for the longest ones: https://surveytime.app/gp6ncXq4Xk I do not own the cover image, if the author will ask me to remove it, I will.