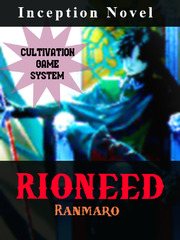 Rioneed : VRMMORPG is a popular web novel written by the author ranmaro, covering VIRTUAL REALITY, SYSTEM, REINCARNATION, FANTASY, KINGDOM BUILDING, ACTION, GAME-ELEMENTS, NECROMANCER, TIME AND SPACE TRAVEL, SCIENCE FICTION, Fantasy genres. It's viewed by 1.2M readers with an average rating of 4.69/5 and 60 reviews. The novel is over and can be read all 452 chapters in Webnovel with all rights reserved.

** COMPLETED NOVEL ** Alternate name: Rioneed: The Rise Of a Necromancer. "A fallen hero will be a legend if he got a chance to live his life again." -Ibro. Ibro was the hero humanity waited for... a necromancer, but he was betrayed. In a world full of demons, monsters, and gods, humans were the weakest chain. Ibro was their hero, but he -alone- wasn't enough. After Ibro's defeat, he was judged to enter reincarnation to save himself and humanity. Without his memories, losing his powers, and being alone with no aide or friends, Ibro started his journey to rise again. At the low Earth realm, Ibro reincarnated 4 times in a row and failed. Now, he will start his 5th and last reincarnation chance. Follow Ibro in his epic journey to rise from ashes and reach the heavens.