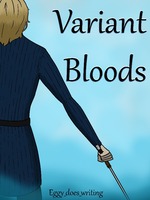 What is Variant Bloods

Variant Bloods is a popular web novel written by the author Eggy_does_writing, covering FANTASY, GL, ROMANCE, FEMALELEAD, VICTORIAN ERA, LGBTQA, ELVES AND OTHER SPECIES, SECRETIDENTITY, BAD PAST, Fantasy Romance genres. It's viewed by 9.6K readers with an average rating of 4.56/5 and 20 reviews. The novel is being serialized to 13 chapters, new chapters will be published in Webnovel with all rights reserved.

Her skin was a warm ivory color while her sparkly eyes were periwinkle blue, almost purple, which Saphrin focused on since she had never seen such vibrant colored eyes before. After running away from home, Saphrin DiMero changed her identity and disguised herself as a male mercenary. Afterwards, she was hired by a noble family, known as the Ferdims, to be Madam Ferdim's bodyguard. Despite all this, she still fears being caught by the people who are trying to hunt her down. Caspery Tularious, a half elf, was sold into slavery for domestic labor after the death of her mother. She has been working for the Ferdim family since she was twelve and has been treated very poorly ever since. Everything changed when the two met each other, for better or for worse. This story also follows the beginnings of a few other protagonists who will be main characters in the next book. DISCLAIMER: This book contains triggering content such as self harm, suicide, abuse, drugs, and alcohol. This book also contains mature themes such as nudity, strong language, and violence. Reader discretion is advised! Cover art credits: Line art and background by Austin Gann https://austingann275.myportfolio.com/ Coloring and shading by me