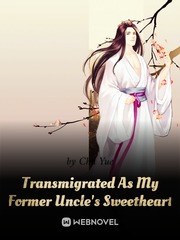 Transmigrated As My Former Uncle's Sweetheart

What is Transmigrated As My Former Uncle's Sweetheart

Transmigrated As My Former Uncle's Sweetheart is a popular web novel written by the author Chu Yue, covering Historical Romance genres. It's viewed by 849.8K readers with an average rating of 4.53/5 and 99 reviews. The novel is being serialized to 61 chapters, new chapters will be published in Webnovel with all rights reserved.

Lu Liangwei wakes up to find herself transmigrated as a supporting character in the novel she had been reading a few days ago. According to the novel, this character has everything—beauty, wealth, status—except brains. Before Liangwei had taken over, she even went as far as to hang herself for the male protagonist that she loved: the Crown Prince as well as her sister's lover. Now that she has become a "brand new" person, it is time for her to turn her life around with charm and wit! She will get everyone to fall in love with her, even the Crown Prince's uncle—the Emperor! Who needs a prince when you can become the Empress herself?

Bigoted Mr. Fu Lets Me Do Whatever I Want

Madam Is A Sensational Figure In The City

Evil Prince, Come Play With Me