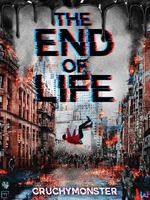 What is THE END OF LIFE

THE END OF LIFE is a popular web novel written by the author Cruchymonster, covering APOCALYPSE, ZOMBIES, SUPERPOWER, SURIVIVAL, ACTION, SELFISH MC, Horror&Thriller genres. It's viewed by 992.4K readers with an average rating of 4.74/5 and 54 reviews. The novel is being serialized to 120 chapters, new chapters will be published in Webnovel with all rights reserved.

"THE END IS HERE" The only sentence which made sense in the situation Mark was in. Trying to take the easy way out from all the horrors of his life Mark Blaze encountered the eruption of Zombies. The fight for survival has started. Would Mark be able to survive while facing his dark past he wanted to get away from or would he lose everything once again? IMP NOTE- THE MC IS NOT COLD BLOODED AND ISN'T A SOLO WARRIOR. IF YOU EXPECT THAT KIND OF CHARACTER THEN I CAN ONLY SAY THIS BOOK DOES NOT PROVIDE YOU THAT. NOTE- This book is for the spirity contest so please do support it