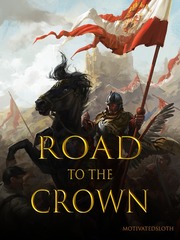 What is Road to the Crown

Road to the Crown is a popular web novel written by the author MotivatedSloth, covering KINGDOM-BUILDING, WAR, SYSTEM, GAME-ELEMENTS, ROMANCE, ACTION, POLITIC, EARNED POWER, GORE, History genres. It's viewed by 2.2M readers with an average rating of 4.45/5 and 83 reviews. The novel is over and can be read all 335 chapters in Webnovel with all rights reserved.

Political marriage, war taxes, subsidies, a tribute... All those terms sound nice when one juggles them from behind the screen of his trusty computer! Junk food? Check. Sugary drinks that will cause me diabetes? Check. Two weeks of leave from the work? Check. A fresh copy of the newly released game finishing downloading as I'm going back from the grocery store? Check. Oops! My emotions got better to me, and I tripped on the stairs. I'm so silly! Then... Why the hell am I kneeling in a throne room, watching the marriage and coronation ceremony of the King, dressed in the noble robes with the game itself only flashing in the corner of my eyes? Discord link: https://discord.gg/pJTVGZZ