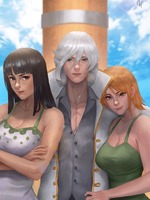 What is One Piece: Harem King

One Piece: Harem King is a popular web novel written by the author Orademo, covering HAREM, SYSTEM, ONE PIECE, TRANSPORTED INTO ANOTHER WORLD, ROMANCE, ACTION, ADULT, FICTION, Fantasy Romance genres. It's viewed by 1.4M readers with an average rating of 4.07/5 and 67 reviews. The novel is being serialized to 39 chapters, new chapters will be published in Webnovel with all rights reserved.

What would you do if you woke up in the world of One Piece with a powerful System? Live life to the fullest in a world where strength speaks! Join me on discord! https://discord.gg/MD52q22