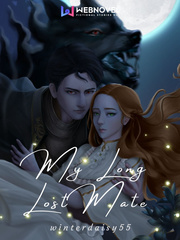 What is My Long Lost Mate

My Long Lost Mate is a popular web novel written by the author winterdaisy55, covering WEREWOLF, ROMANCE, LOVE, FANTASY, ADVENTURE, ACTION, MATE, VICTORIAN, WITCH, Fantasy Romance genres. It's viewed by 501.3K readers with an average rating of 4.8/5 and 75 reviews. The novel is being serialized to 48 chapters, new chapters will be published in Webnovel with all rights reserved.

[A novel set in the Victorian era] "Oh! Thank you for catching that little troublemaker. Please give her back to us," said one of the guards while panting for air. Not knowing what to do, I frantically held the man's hand and pleaded, "Please save me! They are going to hurt me! I don't want to go back!" The man first looked at me for a couple of seconds, then to the guards, "Go," he said to the guards grimly. Surprisingly, he is on my side. I was actually counting on my lucky stars to ask for help from him. "What?" asked the guards, confused by the man's words. "I said go... before I kill you," he threatened. I was hiding behind the man's back and couldn't see his face but my guts told me that he meant his words. The guards looked surprised by his words but quickly recover from it and instead, started to challenge the man, "We won't go before you hand us that girl." The man sighed and said, "I warned you," after that, the man let go of my hand and turned my body around. "Don't look," he said before starting to walk towards the guards. Every step he took exuded confidence, and he was not the least scared of the guards who were armed with swords when he himself got nothing but his bare hands. I closed my eyes even with my back towards them and heard one of the guards scream trying to attack the man. No longer after that, the only sound that I could hear was something like... bones breaking, I think? A few moments later, it was completely silent. Is he done? The silence was soon broken by footsteps that I assumed were getting closer to where I was. Is this the footsteps of the man or the guards? That was the question that popped up on my mind. I was ready to run, but before I could proceed to do that, two strong arms grip both of my shoulders, turning my body around. I nervously opened my eyes to found a pair of red eyes staring softly at me. "Are you okay?" ------ The story revolves around a girl who was tortured and the leader of werewolves.

I Choose The Villain Duke