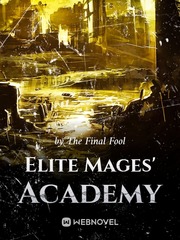 What is Elite Mages' Academy

Elite Mages' Academy is a popular web novel written by the author The Final Fool, covering Sci-fi genres. It's viewed by 1.7M readers with an average rating of 3.81/5 and 246 reviews. The novel is being serialized to 148 chapters, new chapters will be published in Webnovel with all rights reserved.

What would you do if you were transported to an academy where becoming immortal was possible? Where magic spells and swordsmanship were your courses and fighting zombies and wars were your exams? Dawn Academy was no ordinary learning institution and Xiao Lin was about to find out how mysterious and exciting this magical academy really was. Join this self-professed gaming nerd as he embarks on a journey that takes learning to a whole other level. With flying dragons, high-tech systems, and alien livestock that makes your bowels explode, Xiao Lin’s freshmen adventure is just the tip of the iceberg.

Only I Am a Necromancer

Master of the End Times