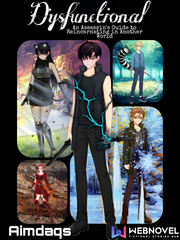 Dysfunctional - An Assassin's Guide to Reincarnating in Another World

Following an untimely death, a former assassin and human test subject is given the opportunity to reincarnate in another world. Having been a fan of anime in his old world, he opts to reincarnate in a world with magic and fantasy-like elements, and chooses to retain his previous memories. Once he arrives in the new world, he decides to become an Adventurer and make use of the assassination skills he learnt in his old world along with the magical abilities he gains in this world, meeting new people and even learning more about himself in the process. And so, as he begins a new journey in an unfamiliar yet intriguing environment, just what lies in store for him in this strange new world? Genre - Fantasy Sub-Genres - Isekai, Action, Magic, Dark Fantasy, Romance, Comedy, Coming-of-Age Age-Rating - Pg-13 Warning: Mild Profanity, Mild Sexual Content, Violence