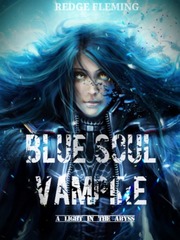 Blue Soul Vampire: A Light in the Abyss

Hiatus A certain warrior was cursed for eternity to bear the name of the Blue Soul Vampire. Eternal life tormented him, until eventually he wanted to end his life. Since Blue was unkillable, he challenged humanity to kill himself, when they failed, they resorted to a portal weapon sending him into another world. The ruthless Blue got sent into the world of Altheon and that's when he encountered a kind Light Mage named Celina. Altheon was in complete shambles as the demons seeked to revive the strongest demon lord. Blue and Celina teamed up together, he hoped she can become strong enough to kill him one day. She was only given two years to do so, and if she fails then Blue will end her along with the entire humanity. The polar opposites journeyed across the land of Altheon, Celina is seeking strength, while Blue slowly regains his sympathy. They forged a connection they didn't know was possible, will his goal also mold into something else? ___________ If ur tired of reading Cultivation novels who only cares about becoming strong, but instead are looking for a novel that has some memorable characters, planned story, good development, flawed male and female lead, some twists. Then I think you should try this one. I hope you can bear with the numerous characters being introduced early since they are all needed for the story to work. Every characters here will learn to struggle, MC included. This also has some romance in it, and I hope their dynamics would be fresh for you. The credits for the cover goes to AdeleG, https://abstract.desktopnexus.com/wallpaper/1181313/