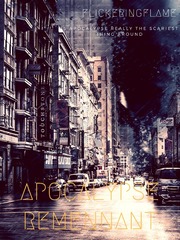 Humans with best genes supposedly became mindless zombies in a single second all due to failed evolution. Zombies evolved from level 1 to 2 on the first day of Apocalypse. Animals evolved to become intelligent and started a war against humans for oppressing them for ages. •°•°•°•°•° A world in which zombies, Intelligent Evolved Animals are just the start of the apocalypse as something far worse is heading humanity's way. "Can this world get any crazier??" Jason asked as he looked at the sky unknowingly jinxing all the remaining human population on earth... Follow Jason and his group as they fight against all odds and help humanity survive something far worse than a Zombie Apocalypse. Discord Server for Apocalypse Remnant`: Discord Link: https://discord.gg/jkHrRWd Support me to pump out more chapters: https://ko-fi.com/flickeringflame