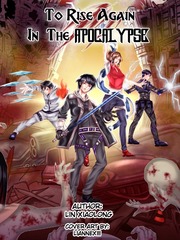 What is To Rise Again in the Apocalypse [BL]

To Rise Again in the Apocalypse [BL] is a popular web novel written by the author Lin_XiaoLong, covering BL, REINCARNATION, TRANSMIGRATION, ZOMBIE APOCALYPSE, CULTIVATION, REBIRTH, XIANXIA, DANMEI, MULTIPLE MALE LEADS, XUANHUAN, LGBT+ genres. It's viewed by 1.8M readers with an average rating of 4.69/5 and 158 reviews. The novel is being serialized to 131 chapters, new chapters will be published in Webnovel with all rights reserved.

This series are also available at: 1. Tapas 2. Foxaholic Other than that, the chances of you reading off from a pirate site are high. They did not upload it with my permission. Ko-Fi: ko-fi.com/linxiaolong Patreon is also available at: patreon.com/littledragon Discord: https://discord.me/lxl Li XinWen is a cultivator and was a peak master of the Soaring Heaven Sect. Having obtained a treasure that made even his fellow sect members green-eyed, Li XinWen was betrayed and had everything taken away from him. Years of cultivation gone for naught in the face of death and yet, his soul is unwilling to let everything go. The next time he opens his eyes, he finds himself in an unfamiliar world, in an unfamiliar body. By coincidence or fate, the body he's inhabiting is also called Li XinWen. Except, this Li XinWen is mortal and an actor at that! The master cultivator then decides that since he has been given second chance, he may as well use it to his advantage. Family? Since he has never had one before, then he will try his best to protect and enjoy this familial warmth. Money? There doesn't seem to be any problem since the original Li XinWen of the body he's occupying is quite successful. Cultivation? Excellent! This body has the aptitude for it! Li XinWen can once again begin his journey to the path of cultivation. Love? Now that is a bit complicated... Why does he have this scum hounding his back?! Dear sister, please put a leash on your fiance! The end of the world? Li XinWen: "Oh... wait, what?!" Disclaimer: This is fiction, a work of fiction and is purely fictional. Names, characters, businesses, places, events and incidents are either the product of the author's imagination or used in a fictitious manner. Any resemblance to actual persons, living or dead, or actual events is purely coincidental.

Reincarnated into a Hell Hound - BL/Yaoi