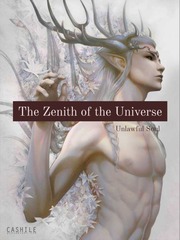 The Zenith of the Universe

What is The Zenith of the Universe

The Zenith of the Universe is a popular web novel written by the author UnlawfulSoul, covering ZERG, EVOLUTION, KINGDOM-BUILDING, NONHUMAN PROTAGONIST, ADVENTURE, FAST-PACED, INTERSTELLAR, REINCARNATION, INTERGALACTIC, Fantasy genres. It's viewed by 7K readers with an average rating of 0/5 and 1 reviews. The novel is being serialized to 3 chapters, new chapters will be published in Webnovel with all rights reserved.

At the death’s door he was calm. He has always been alone.  Orphaned. Mute. Unwanted. That is basically the summation of his short life, yet he has no sense of resentment. In the last life, he was like a spectator; Basking in the sun, Watching the changes in the world, Observing people’s way of life, Up until he became one with nature. He wondered, what happens in the afterlife? It’s a question that no one can really answer and something he won’t experience Because he woke up. Thrusted in a bizarre world with a foreign body, unfamiliar to him And a massive responsibility that could overwhelm him any second Can he face it? Nevertheless, he’s ready because he found something he has always yearned for, And he was the existence they have been searching for, A Family. Their Home. ••• Book Cover Art: Cashile from DeviantArt Author: Unlawful Soul