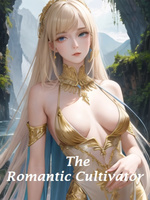 What is The Romantic Cultivator

The Romantic Cultivator is a popular web novel written by the author Avidfan, covering HAREM, ROMANCE, CULTIVATION, HIDDEN GEM, COMEDY, XIANXIA, MISUNDERSTANDING, MYSTERY-ROMANCE, STRONG FEMALE LEADS, REVENGE ENEMIES, Martial Arts genres. It's viewed by 1.7M readers with an average rating of 4.8/5 and 64 reviews. The novel is being serialized to 205 chapters, new chapters will be published in Webnovel with all rights reserved.

A Xianxia adventure; Sword Saint Ji Yuan has just breakthrough to the lofty seventh realm saint level after a period of 100 years. When he returns to his celestial clan where he was once the Sword Saint, he has found out that many things have changed. This isn't your typical OP cultivation story because the first rule of OP means the MC will have the plot armor of never encountering anyone that can kill the MC even if the MC is a low level rookie. But not Ji Yuan because he had made deadly enemies of the highest rank at the start of the story. He has also happened to cross deadly paths with the Two Great Goddesses of the Desolate Celestial Fraternity at the same time, causing them to come after his life and forcing him to hide for a hundred years. "Why did I have to drop into Xue Qianxue's bathtub?" "Why did I have to touch Ling Feiyue's boobs?" Now he's back. But now instead of the Two Great Goddesses, there are now the Four Great Beauties of the Desolate Celestial Fraternity. This is actually a xianxia romance story about an unromantic cultivator who likes his beard and the romantic leading maidens who all hates his beard. There are a total of seven celestial levels in order to cultivate as a celestial cultivator; Practitioner, Master Practitioner, Enlighten Celestial, Immortal Celestial, Golden Celestial, Golden Supremacy and Sacred Saint.

Reincarnation of a Worthless Man

The Rise of the Ero Masseuse System