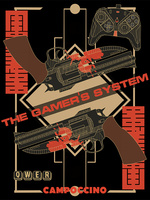 What is The Gamer's System

The Gamer's System is a popular web novel written by the author Campoccino, covering SYSTEM, LEVEL-SYSTEM, REINCARNATION, ADVENTURE, ACTION, COMEDY, LEVEL-UP, SWORD-AND-MAGIC, SLOW-PROGRESS-NOVEL, Video Games genres. It's viewed by 1.5M readers with an average rating of 4.8/5 and 31 reviews. The novel is being serialized to 118 chapters, new chapters will be published in Webnovel with all rights reserved.

On earth, there is one man who ruled every game that has ever been created - Zeke Elwood. A high school dropout turned gamer who has lived the rest of his life playing every kind of game. His fame increased like wildfire as he'd always prove to be the strongest, using the most unconventional methods. Life on earth became boring for him at this point until - an unknown game developer sent him the game called "Mythos". This sent him to another world, clearing a trial created by the three major gods and, getting chosen as their new champion. With all that took place, Zeke is given a [Gamer's System]. One which he'll use to beat all the records set by the humans who have been chosen before him.

The Evolution of a Goblin to the Peak