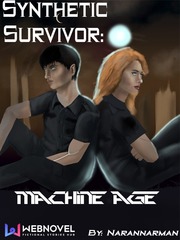 “There is this aching feeling, it pains my heart and fries my already half-human and half-machine heart. I awoke in a world of death and destruction, I am the only survivor. But this may be a blessing, this new world, this world that boasts magic, maybe I will finally bring salvation to my world, even if it causes millions of lives,” One woke with amnesia underneath the shattered remains of a once prosperous human civilization. He remembered nothing, his past or the events that happened that caused the world to become as it was. He was no longer purely human, he woke to find himself a hybrid between a man and a machine. But amid the radioactive dunes and lifeless expanse of the Earth, a lone machine network survived the disaster. After discovering that he controlled them, he set out on one goal: Rebuild. But how can he fully rebuild? For the Earth once had life but now was barren, not even bacteria survived. Until the wormhole appeared a decade later. But he was not alone, when he awoke, a voice rang in his head, who was it? It was his friend, a friend from the past. Although he does not remember her name, he still felt how important she was before even if he has lost all his humanity and memories, her name was Hailey. Follow her as she guides One a decade after he awakes, the both of them will form the most powerful machine leaders who will ever walk in the face of the two worlds. Their story will start a decade into One’s rebuilding, he now controlled a vast network of machines around the planet Earth, all focused in the effort of rebuilding the world towards its former glory, there was only one thing missing, an essential attribute which differentiated Earth from all other known planets, life. But everything changed when a wormhole opened, a breach within the fabric of space and time, opening a pathway between Earth and a world of fantasy! Follow One as he and his Empire explores this new mystical world full of elves, goblins, orcs, dwarves, ogres, humans, kingdoms, empires and magic! His goal of restoring life may be within his grasps. But that does not mean there won’t be opposition. There will be battles, wars and calamities, millions will perish in the onslaught that will soon follow. Especially, when One discovers that the new world held the secrets of the past. He will face Deities and powerful foes, will he prevail? New weapons he will smith and countries he shall wipe out, for he is, One. ----- Discord: https://discord.gg/HrTg3T8