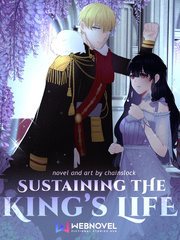 (WARNING: R18 on chapter 200+ onwards. This is a SLOW BURN ROMANCE. Read at your own risk.) On a secluded mountain situated upon a kingdom known as Feuersturm, resides a seemingly trifling cabin with an unlikely duo as its inhabitant—a witch, and her apprentice who presumably comes from a clan sought after by slave traders. Faustina is a sixteen-year-old girl who fled the slave market with the help of a sickly witch named Eula, who later on trained her as an apprentice for the span of seven years. Plagued with a mysterious disease for several years, Eula died despite the efforts Faustina had exerted to cure her; in her last breath, she left an odd request behind. "Sustain the king's life. This is your duty. Do not adhere to the prophecy." To which the odd plea shadowed a bizarre series of events, a consequential sentence; similar to that of a premonition. The same night the phrase was muttered, the chain of events followed: A warlock's intrusion to their home, with a peculiar yearning to resurrect Eula from the dead... and the king himself, asking for Faustina’s aid. Drawn by Chainslock with a pose reference from pinterest. Credits to Hesreth for the title design! [1-2 chapters a day (GMT+8)]