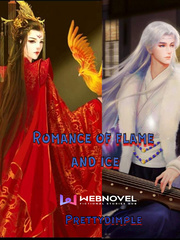 What is Romance Of Flame And Ice

Romance Of Flame And Ice is a popular web novel written by the author prettydimple, covering ROMANCE, REINCARNATION, CULTIVATION, ACTION, ADVENTURE, LOVE TRIANGLE, WAR, HATRED, FANTASY-CULTIVATION WORLD, BEAUTIFUL FEMALE-LEAD, Fantasy Romance genres. It's viewed by 149.1K readers with an average rating of 4.55/5 and 13 reviews. The novel is being serialized to 222 chapters, new chapters will be published in Webnovel with all rights reserved.

"Do you really hate me that much?" tears flowed out of her eyes seeing the cold gaze in his eyes, devoid of any feeling and emotion. "I do, I don't just hate you but I wish you would just disappear, away from my sight, away from this world just like you came," he brushed her hands away from his sleeve and turned to walk away. She broke into a peal of hysterical laughter. "Then why did you save me?" "Right...why did I save you," he stopped for a moment but he continued walking away without turning to look at her. She had no will to live. "Since you hate me so much then I will disappear from your sight, from this world," she slowly took steps back until she reached the end of the cliff. "Bye," she smiled with her tears flowing to the side of her face as she fell down the cliff, he stopped when his side glance caught the edge of her dress, he turned back in horror. "No!!" ................ What if the man you love loathes you to the point where he wouldn't care if you die right in front him, you live in the same palace but you are always scared to look him in the eye unlike before when he used to care about you, every single detail. This is the plight of Huo Yu Yan. The novel tells the story of the love between a partially amnesiac general surgeon and a military surgeon who would rather gain her heart again than force her to remember their past, he chooses to be her present. After getting the happiness they have always yearned for, she ends up going into a coma where her soul is combined with the soul of the young mistress of the flame sect who is also at the verge of death. But only one of them can survive, the moment one remembers what she is not supposed to remember, she dies. He used up his only chance to save the woman he loves but he ended up saving another woman instead, seeing her smile with a face that is not hers and act carelessly with a body that doesn't belong to her, he loathed the sight of her. To join the discord server for this novel: https://discord.gg/d5MPSyZV

EMPRESS OF THE LOST KINGDOM

Revenge with the help of Love

The Mischievous Maiden & The Sleeping Prince