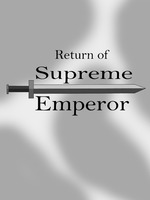 What is Return of Supreme Emperor

Return of Supreme Emperor is a popular web novel written by the author mrCat, covering REINCARNATION, ROMANCE, ACTION, ADVENTURE, COMEDY, ISEKAI, MARTIAL ART, CULTIVATION, Fantasy genres. It's viewed by 436.9K readers with an average rating of 0/5 and 7 reviews. The novel is over and can be read all 207 chapters in Webnovel with all rights reserved.

How far can you go for love? Are you willing to destroy your legacy for her? Are you ready to burn the world for her? Are you ready to give up everything for her? Follow the story of a man who was respected as the supreme emperor, who once ruled the heaven and hell but still he let the whole world burn for his love. Was that the right decision? No one knows This is the story of a man who is reborn to meet his love one more time why is he Hated by Gods and Demons? Will he ever be able to meet his love again? Let's know it in this story

Records of the Weakest Emperor

Awakening of the Ancient: Rise of the Fallen