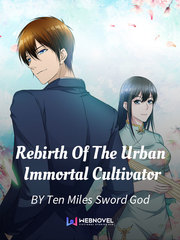 Rebirth Of The Urban Immortal Cultivator

What is Rebirth Of The Urban Immortal Cultivator

Rebirth Of The Urban Immortal Cultivator is a popular web novel written by the author Ten Miles Sword God, covering Magical Realism genres. It's viewed by 8M readers with an average rating of 4.36/5 and 925 reviews. The novel is being serialized to 1070 chapters, new chapters will be published in Webnovel with all rights reserved.

Chen Fan, the great cultivator, failed to transcend the Tribulation of Heaven: the final stage of his cultivation. Little did he know that this accident would bring him back to Earth and turn back time to five hundred years ago when he was just a teenager. ‘I had once reached the precipice of power in the known universe and could look down on the ten thousand realms with pride; I was lonely nonetheless. I will not leave any regret nor anyone behind while I relive my past life this time around. ’ Join Chen Fan as he relives his teenage years, righting the wrongs of the past as he punishes his unwitting old enemies.

A Stay-at-home Dad's Restaurant In An Alternate World

Returning from the Immortal World

Legend of the Mythological Genes

Rebirth of the Godly Prodigal