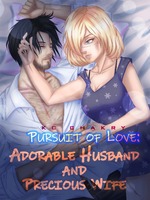 What is Pursuit of Love : Adorable Husband and Precious Wife

Pursuit of Love : Adorable Husband and Precious Wife is a popular web novel written by the author KCChakry, covering ARRANGED MARRIAGE, DOTING HUSBAND, ROMANCE, MODERN, STRONG FEMALE LEAD, SWEET LOVE, SPIRITYAWARDS, SPIRITYAWARDSSPRING2020, HUSBANDANDWIFE, MARRIED COUPLE, Contemporary Romance genres. It's viewed by 31.2K readers with an average rating of 4.73/5 and 27 reviews. The novel is being serialized to 18 chapters, new chapters will be published in Webnovel with all rights reserved.

Lucian and Violette are two different people from two different worlds with two different mindsets. But they are alike in more ways than it seems. Still grieving her parents’ death, Violette never had any thoughts of finding a prince charming or leading a happy life. She built impenetrable cold, hard walls and isolated herself from the outside world in order to protect her grieving heart and wounded body. That's when HE came into her life. After overcoming his mother’s death and a tough period of depression, Lucian went through many setbacks and successes in order to stand back on his feet. But then he lost his interest in everything and began drifting across the land without a purpose or goal. That's when he found HER. They both agree to marry the other to fulfill the last wish of a dying old man whom they both consider dear than family, so he could let go of his worries and rest easy knowing they would have each other going forward. Although they were pushed into the relationship under unusual circumstances, as they begin their new journey together, they find themselves slowly drawn to each other in more ways than one. Both wounded and seeking warmth in a place far away from home. But will they be able to come together and stand beside each other, hand in hand? The red string of fate had intertwined their destinies together and as they continue their journey, they will realize they belong together. - - - This is my entry for the Spirity Awards so if you like the story, please support it with a power stone or two. Also reviews are always welcome and appreciated. Cover: Mine, so, do not use it .

Mr. CEO, Paint My Love in Your Heart