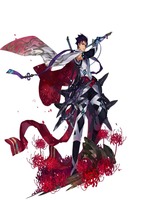 What is Prince of Hell: Dark Lancer

Prince of Hell: Dark Lancer is a popular web novel written by the author GreatSage_Master1, covering HAREM, MATURE, ECCHI, MARTIAL-ARTS, FANTASY, REAL WORLD, DEMONS AND GODS, Realistic Fiction genres. It's viewed by 420.2K readers with an average rating of 0/5 and 4 reviews. The novel is being serialized to 21 chapters, new chapters will be published in Webnovel with all rights reserved.

Eight years ago, a fire killed Kaguya Bertram and her husband, Julian Bertram, leaving their only son alive. The house was burned in black flames, from which the boy was rescued intact despite being in the center of the fire. After the accident, the boy remembered nothing. Ryujin Egun is the heir to Japan's prestigious Suijin family. Although he is adopted, he is the heir because he is the eldest son and because of his adoptive father's desire not to get his only daughter in trouble because of their surname. Although he doesn't remember anything about his past before he was adopted, Egun loves his family very much and is happy with them. He would do anything for his family, even take a spear and become an assassin. He is like a coin. The pretty face is Ryujin Egun, the perfect heir, and the ugly face is Lancer, one of the most recognized killers in the dark world. His life went perfectly until a werewolf attacked him one night. What is his true identity? What were those black flames? Will there be a well-kept secret behind the incident eight years ago?