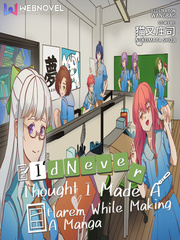 I never thought I made a harem by making a manga

I never thought I made a harem by making a manga is a popular web novel written by the author Nekomata_Shoji, covering HAREM, ROMANCE, COMEDY, SLICE-OF-LIFE, MANGA, DRAMA, SHONEN, Realistic Fiction genres. It's viewed by 171.5K readers with an average rating of 4.94/5 and 32 reviews. The novel is being serialized to 58 chapters, new chapters will be published in Webnovel with all rights reserved.

"As a child, Kenji Yoshikawa did everything by himself and dropped it once he was bored. But his family is full of mystery, especially his father, a retired mangaka. After finding out the secret behind his father's actions, he decided to pursue becoming a mangaka. After this, surprisingly, he somehow managed to get into a harem due to his manga works."

My new item can raise infatuation, but!

Underrated Exorcist : The Legacy of The Supreme's will

Problematic Little Sister Fell In Love With Me

My Servant Is An Elf Knight From Another World