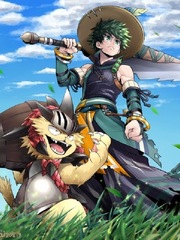 Izuku Midoriya, being pulled out of his fanboy delusions, walks home mentally battered. He began finding a way around the situation, how he will never be a hero. He then decided that, rather continuing living in this lies-of-heroes world, it would be better to simply just end it all; not like anybody is going to care. After finding a six story building next to the ocean, Izuku walks up the roof into the emergency exit of the building. He sits in the border curb of the rooftop as he contemplates the sunset with its orange and fluffy companions. He mutters, "Men really are not born equal." With this thought in mind he leans forward, and drops. As the waves crash violently because of the sudden intrusion, some shades of crimson taint the ocean. The ripples in the ocean start to fade away just like the sunset. The silence overcomes the shore, occasionally broken by crashing waves. *DING* *Quirk Activation: overcome a li-....*