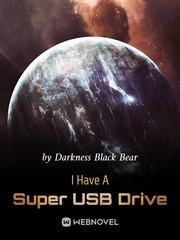 What is I Have A Super USB Drive

I Have A Super USB Drive is a popular web novel written by the author Darkness Black Bear, covering Sci-fi genres. It's viewed by 1.9M readers with an average rating of 4.29/5 and 342 reviews. The novel is being serialized to 271 chapters, new chapters will be published in Webnovel with all rights reserved.

Who could have guessed that the accidental discovery of a pitch-black USB drive would one day turn Chen Chen’s world upside down? He quickly realizes that this was no ordinary USB drive—and it came with mysterious powers, along with its own hidden rules. Equipped with his skills and intellect as a student of biological science, Chen Chen strives to uncover the limit of the USB drive, and the limit of his own ambition. Follow Chen Chen in his pursuit of lofty aspirations—wealth, immortality, and otherworldly powers! It is a path that will lead him to a grand plan, one that will change the fate of humanity forever…